A gland may be defined as a single cell or a group of cells, which are specialized for secretion(useful products;, or excretion (useless products). All gland cells produce and expel, to the extracellular compartment, produced  that are not used by the cell itself but are of importance to other parts of the organism.

Glands are always derived from covering epithelium by means of cell proliferation and invaion of subjacent connective tissue, subsequently followed by further differentiation.The glands are classified into two major groups. 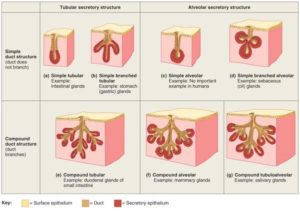 These are glands that retain their connection with the surfaces epithelium from which they originate. This connection takes the form of tubular ducts lined with epithelial cells through which the glandular secretions pass to reach the surface.

These are glands whose connection with the surface, from which they originated. was obliterated during die developmental process. These glands are therefore ductless. The secretions of these glands are Picked up and transported to their site of action by the blood stream, rather than by a duct system. According to cell grouping, two types of endocrine glands can be differentiated. In type one, the agglomerated cells form anastomotic cords interspersed between dilated blood capillaries e.g. adrenal glands, parathyroid glands and anterior pituitary. In the second type (follicular), the cells lines the follicles filled with non-cellular material e.g. thyroid gland.

These can be classified on the basis of four factors.Number of cells  e.g.. unicellular and multicellular. Duct system e.g.. Simple, compound and secretary portion of the gland e.g.. tubular and tubulo alveolar. Nature of secretion e.g. mucus, serous and sero  mucous.

A gland may consist of a single secretary cell interposed in an epithelium between cells of other functions e.g. mucous goblet cells.

In this case the glandular component consists of more than one cell. They may occur as:Epithelial sheaths e.g. surface mucous cells of stomach . Intraepithelial gland e.g. uretheral mucous glands.Complex glands with ducts. The complex multicellular glands with ducts are the most numerous and are distinguished by the appearance of their duct system and secretory portions.

On the basis of the duct system alone, the glands can be classified into simple and compound types;

In this case the functional unit is directly connected to the surface epithelium via an unbranched duct.. Depending upon the configuration of the terminal secretory portions,three types of glands are  recognized;

In this type there are no excretory duct and the secretory portions is a straight tubule that Opens directly onto the epithelial surface  e.g crypts of lieberkuhn.

In this variety the secretory portion is a long coiled tubule, connected to the surface by a long unbranched excretory duct e.g. the sweat glands.

In this case the terminal portion is dilated to form an elongated sac  called alveolus or acinus. Here the acinus is associated with an excretory duct. This type is not seen in human beings. A modification of simple alveolar or acinar gland called simple branched acinar  glands are seen in human beings in this case either the acinus is subdivided  by partition into several smaller compartment

e-g. sebaceous gland of skin or several acini are arranged along a duct e.g; Meibomian gland of eyelids.

These glands are found only in the branched form i.e. their secretary portion consists of branched tubules which bear alveoli at their distal end. The small salivay glands of oral cavity. The mucosal glands of conducting part of respiratory tract and the submucosal, (brunner) glands of he duodenum belong to simple tubuloalveolar type of glands.

The duct of these glands branches repeatedly.

According to shape of the terminal (secretory) portion, the compound glands are divided into three

In this type the secretory portion of the glandsare in the form of irregularly branched tubules with numerous acinar outgrowths  on the walls and on the blind ends e.g. salivary glands and pancreas

Based on nature of secretion, the glands are divided into three types i.e. Mucous , Serous

The serous (whey like) secretion is a clear, watery fluid containing a protenious component, often show increased enzymatically activity. The serous secretory cells can be distinguished from mucous by perinulear cytoplasmic basophilia and nucleus  that is basally placed but well rounded e.g. parotid salivary glands.

These glands add both a serous and mucous component to its secretion, in that both types of secretory units occur as either mixed alveoli or mucous units with serous ‘caps’ (demilunes) e.g. sublingual and submandibular glands . Functionally the mucous secretion is both lubrecating and protective. The serous secretion may be lubricating may serve to clean epitlieliai surface and often contains enzymes.

Depending on whether the secretion is merely a product of cell or it consists of part or whole Of gland, the glands are described as merocrine, apocrine and holocrine.

in these glands, the secretary product is ‘separated’ and released through the cell membrane; the cell itself remains essentially intact. The mechanism involves fusion of boundary membranes of secretory granules with cell membranes and resultant discharge of granular contents into the lumen. Most exocrine glands of the body are of this type e.g. salivaey gland, pancreas and prostate.

In these glands part of the apical cytoplasm is lost with the secretary material. Essentially the secretary product lifts off’ at the apical surface of the cell together with either a thin rim of surface Founding cytoplasm or a large cap of luminal cytoplasm e.g. apocrine sweat glands, lipid secretion in the mammary glands and ceruminous glands.

It involves the release of entire cell and the contained secretory product into the glandular lumina. Accumulation of secretary products in these cells results in organelle disintegration and eventual cell destruction e.g. the sebaceous glands.The testis and ovaries may be considered as special types of holocrinc glands in that the whole living cells (spermatozoa and ova) are ‘secreted’, a process sometimes referred to as cytogenic secretion.

The exocrine glands are surrounded externally by a layer of dense connective tissue, which forms a capsule of the organ. Several septa extend from the capsule into the gland substance and divide it into a number of lobes. Each lobe is further subdivided into smaller lobules by thinner septa. The neurovascular bundles pass along the connective tissue septa to reach the secretory element. The secretary cell constitutes the parenchyma of cell and the connective tissue form the stroma of the cell.