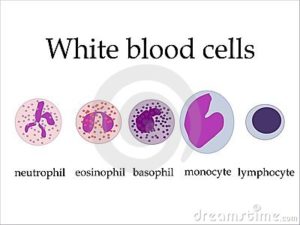 A blood film appropriately prepared and stained is seen under the microscope in oil immersion. Different WBCs are seen which are counted in percentage. The total 100 leukocytes are studied, identified and recorded from a blood smear.

Characteristics of a properly prepared wedge film are as follows:

B. Staining of the blood film by Rack Method.

Criteria for a nicely stained film:

The well stained film should be reddish brown macroscopically. Microscopically, the RBC should be visible salmon pink, the nuclei of the leucocytes should be stained purple blue and the cytoplasm of the platelets should

2. Draw one hundred squares on a paper.

3.The differential cells are counted manually. An area where the film is made quite clear under the low power magnification is selected. The best area for cell counting in a slide is the body of the film and not head or tail. The two drops of cedar wood oil are placed over the slide and the oil immersion lens is shifted in contact with cedar wood oil. Identify various types of leukocyte and enter them by hrst letter (NNeutrophil, EEosinophil, Basophil, Lymphocyte, M-Monocyte) in all 100 squares on the paper. At least 100 WBCs are classrf ed Report the result of 100 cells classified as percentage.

4. Count the cells in a specific sequence to avoid repeated counting. Track method is usually used to count WBCs. (Longitudinal pattern method or lengthwise method is also used) in which cells are countered in consecutive fields in strips or rows from the tail end straight back towards the thitk end of film i.e. cells are counted in one direction and then field is shifted and counting is done in opposite direction. Field is again shifted in the same direction and counting is done in same direction as in the beginning. .